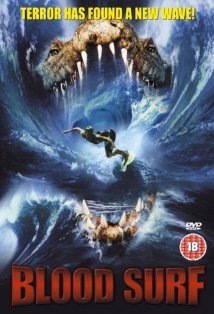 Blood Surf (2000) Though it didn’t get released in North America until 2001, Blood Surf technically came out the same year as Crocodile, and shared the same attacking animal concept, but with a very different premise to put humans and a monster reptile in the same environment. Crocodile did get a direct sequel, 2002’s Crocodile 2: Death Swamp, but I like to think of Blood Surf as its unofficial follow-up.

Blood Surf was honestly kind of eh. A mixed bag, sometimes you’d get a really good scene such as the fight on a sinking ship and the pirate hostage scene, but other times the movie just kind of drags on and on.

The positives of this movie definetly outweigh the negatives, for example, the crocodile himself (apparently he’s named Big Mic, I don’t think anyone in the movie called him that though). Actually looks good for the most part, for the most part it was made with a large animatronic or a puppet, but both still were really impressive to see. The plot was also really creative, I liked the idea of an extreme sport horror movie. It sounds dumb on paper, but it works for the first part of the movie. Giving us a good example of the cinematography. Which is actually really good.

For most of the action scenes, the camera stays really smooth and really gets the juicy details. The best example of this is the fight on the sinking ship between the crocodile and John Dirks.